Something to Crow About

Something to Crow About 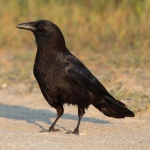 Rick had just left a session at a client’s home and was driving 35 miles an hour (the speed limit) when a crow dive-bombed his car. The head-on collision tossed the bird up over the car and it landed in the middle of the road.

Debating for several blocks, Rick finally turned around, went back and pulled into a small empty lot.

As he approached the still form, he figured the crow was dead, especially when he saw the bright red blood oozing on the pavement. The bird’s eyes were closed, but as Rick got closer he noticed its mouth opening and closing as if fighting for air.

Rick gently picked up the injured crow and brought it back to the lot.
Holding it in one hand and covering it with the other, he started to run energy. Within seconds the bleeding stopped and congealed. The crow opened its eyes, looked at Rick, closed them again and just relaxed right into his palm.

After twenty minutes, Rick set the crow on the ground. There it stayed on its stomach with its legs splayed out, with a little attempt at wing-flapping. He ran distant energy from a few feet away for ten more minutes.

Rick again picked up the bird and held it as he ran energy, and again it just totally relaxed.

After another thirty minutes, Rick placed the crow on the pavement. This time it put its feet underneath itself and stood up. He looked at Rick, flapped his wings and flew away.