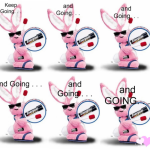 That’s what we called Daddy.
So many times he should have died, and several times he did. Figuratively and literally.

In 1979, when he had quintuple by-pass heart surgery, the doctors expected him to live another two years. But his strong will kicked in and as the years passed, he kept on going. He amazed us.

At some point we started calling him the Energizer Bunny.

I think the first time his heart actually broke was when his Mom died in 1947. He never really got over it.

It broke again, when in the 1970s, his beautiful Pennsylvania acreage and cabin were taken from him by process of eminent domain, supposedly to be made part of a state park.  The reason didn’t matter . . .  he had spent many weekends over the decades, working on the place – a labor of love.

Dad had a massive heart attack in 1978 when visiting with Mom at Lake Isabella, California. Wanting to be seen by his regular doctor rather than at a local hospital, Dad insisted Mom take him home to Los Angeles. It was a harrowing three-hour drive during which Mom suffered through her husband’s pain.

Because of his heart condition, he knew he was going to die before Mom, so when she unexpectedly passed in 1994, his heart was broken yet again.

A severe gall bladder attack almost brought about his demise when he was 86.

And when he was 88, his appendix burst and we watched his life slipping away.  After ten days with a tube down his throat, he mentally said, “no more” and pulled the tube out during the night when no one was around.  It was forced back in.  The second time he pulled it out, it was left out.  The next morning he was eating soft foods, that afternoon solids and he was released from the hospital the following day.
I started calling him mi Hombre de Milagro – my Miracle Man.

Then one night in the summer of 2011 when he was visiting my sister Laurie in St. Louis, she heard a thud from the bathroom. He had died. She started CPR while calling 911. When the paramedics arrived, his heart was zapped back to life with the defibrillator and then zapped again to stabilize his heart beat on the way to the hospital. It was a rough road back, but bounce back he did.
Laurie started referring to him as Timex, because he took a licking and kept on ticking.

There were reasons he should never have lived to be 90 – for one, he never drank water, the very essence of life.
And then, there was his anger. It was always there beneath the surface, ready to flare up at the least provocation. Not a healthy thing.
Nor was his fear of death, in spite of being devoutly religious.

Oh, but he loved life!

He loved to travel and meet people. He had a natural ability to speak with strangers and have them open up and pour out to him their life stories. He was an avid listener, always asking questions, always pulling information out of everyone.

And he himself was a master story-teller with a seemingly bottomless bag of experiences from which to draw.  Some favorites we never tired of, asking when we saw him, “Tell us again about the lightening strike.”  Or, “So, what really happened on your honeymoon?”

And when he traveled, no highways for him. If there was a back road he had never been on, even if it was just a faint, dotted line on the map, well that’s the way he’d want to go. I have been with him in a 2-wheel drive van or station wagon through many a dried-out arroyo and creek bed and over many a mountain pass on which no 4-wheeled drive vehicle had a right to go.

His was a life richly lived and deeply felt.